As I tried to steady my umbrella against the wind, my daughter informed me her hands were freezing. I barely heard her over my son’s crying, but I wanted to point out the fact she was wearing gloves while her poor mother was bare-handed and shivering. This made refreshing the B.A.A. Marathon app on my phone more difficult.

“He’s at 9.7,” I told my friends, who were also juggling an umbrella, a stroller, and a plastic bag-covered poster for my husband, who was running the 122th Boston Marathon.

We were positioned just past mile ten in Natick Center. My friends live about a mile away, a distance we intended to walk had the weather been anything but what it was: not quite forty degrees and pouring rain with wind gusts in the twenty-mile-an-hour range.

It was no surprise that when we arrived, there was open space at the partition blocking spectators from the race route. Front row viewing. We’d surely see him pass, and then we could get the hell out of the cold. Both my kids were hysterical, my son’s pants soaked and his raincoat pooling water in his lap, my daughter’s wet hair glued to her face.

“9.9!” I announced and then reassured my kids, “Daddy’s almost here and then we can leave.”

Well, either the tracking was inaccurate, or the conditions were too poor to see Husband pass, the blur of miserable runners too thick and unvaried. Only one runner during the fifteen minutes we were there mustered enough enthusiasm to reach his hand out to spectators for slapping. The rest hurried by, heads down, arms pumping.

I widened my eyes as much as possible, lifted my camera to get a shot, and waited, blocking out my kids’ commotion and hoping in the back of my mind they weren’t becoming hypothermic. My next refresh told me Husband was at mile 10.7, a meaningful distance from where we were standing.

Our efforts were futile, our disappointment as palpable as the discomfort worn on each runner’s face as they passed.

We took no time to gather our belongings and trek back to our cars in an urgent frenzy, my mind recalling what Helen Keller once said. “Life is either a daring adventure or nothing at all.” I spoke these words to my children as they continued to cry once inside the safety of our vehicle. Surely, it was the most miserable experience of their lives to date, but perhaps one they might remember.

It is indeed these unique times that make life worth living. To all the determined, and perhaps defiant, souls who ran and finished this race, you were a part of something big. Wretched in many senses, yes, but irrefutably special. The spectators felt it, too.

My friends and I were dry and comfortable within minutes of leaving the route, but there was a deeper appreciation for what the runners were enduring. I was already proud of Husband for qualifying for the Boston Marathon, meeting some of the most ambitious standards in the nation. But, the fact he finished only minutes after his PR time is truly amazing. 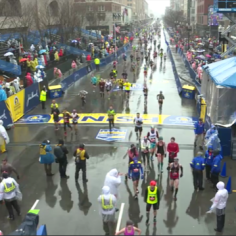 I’m glad I got out for part of the race (and likely saw Husband run by without realizing it, at least that’s what I’m telling myself) and I’m glad I dragged my kids along with me. It was a race for the ages, a daring adventure, one that tens of thousands of runners, spectators, security personnel, and volunteers will never forget.