Samsonite gazed through the darkness at the closet door handle. With a small jump, she might be able to loop her top handle over it and turn it. Then she’d be free.

Her owner, Kim wasn’t home from work yet and it was a short roll to the bathroom. Of course, who knew if her wheels still worked? The last time she was used, she was carried from the closet by Kim when Kim was having new carpet installed in the master bedroom. Samsonite had been placed in the bathroom along with other items from the closet, items that were frequently, or at least occasionally, used. Shoes, old t-shirts, Hell, even the fancy clutches were sometimes grabbed and taken along to special events.

In her heyday, she and Kim traveled frequently. Sometimes for work, but mostly for pleasure. Samsonite had been to Los Angeles and San Diego several times, Philadelphia, Chicago, and New York City since the day Kim purchased her and the matching cosmetic bag back in 2006.

As far as Samsonite could recall, the last trip she took was in 2012. Kim and her husband’s “Babymoon.” What a glorious trip! It was Samsonite’s first time abroad and London was everything she could’ve wished for. Smooth sidewalks, temperate weather, and striking designer luggage that made Samsonite blush when she passed them in the storefronts.

Now Samsonite was desperate to return to the bathroom. When Kim last carried her there, she thought she and the cosmetic bag were going to be reunited and taken on an adventure. It didn’t even matter where, just that she was going somewhere. That dream died when the cosmetic bag, her old friend, didn’t even recognize her. She explained to Samsonite she had made several trips to Cape Cod this summer and once the new carpet was in, she was heading to Vermont for the weekend.

“Shame about being stuck in the closet, though,” the cosmetic bag said snidely, shifting herself into a more comfortable position in the vanity drawer. 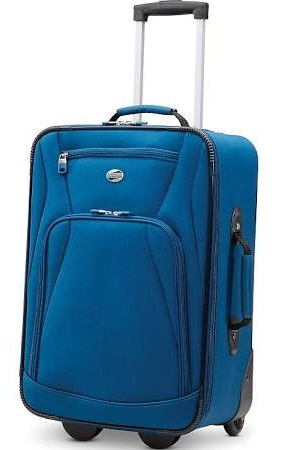 That’s when Samsonite looked at the bathtub and decided she was going to drown herself in it.

“Just what do you think you’re doing?” Woolly said to Samsonite as she slowly made her way to the door of the closet.

“No one understands,” said Samsonite. “I’m no longer of any use. At least you’re seasonal and get taken out when the weather gets cold. Kim can’t go a year without a winter coat. Who knows when she’ll start traveling again. I’ve had enough waiting around.”

“I hear she got invited to a wedding in California. Surely, she won’t pass that up,” Woolly offered.

Samsonite’s inner straps, the ones that used to prevent clothes from spilling to the other side, tightened in her belly. Hope was a dangerous thing.

Even if Kim went to this wedding, she’d probably bring her husband and they’d probably share the same dreadful duffel bag they took on all their unexciting weekend trips with the kids.

No, it was time to end things once and for all.

Samsonite jumped, looped her strap on the knob and pushed open the door. Her wheels struggled on the new, plush rug, but with determination, she made it to the bathroom. There, weathered but poised, she drew the water. Not a peep came from the vanity.

One thought on “Suitcase Suicide”