In honor of Saint Patrick’s Day tomorrow, I thought I’d revisit the time I went to Ireland. Like 80% of my international travel, I went to Ireland while studying abroad in London. I remember the trip clearly, because I was moved to tears, which hasn’t happened anywhere else I’ve been.

Allow me to elaborate.

Who: Me, two of my three roommates, and a bus full of tourists

What: A “Wild Wicklow” bus tour

My roommates and I were only in Dublin for the weekend, so a condensed, somewhat far-reaching sightseeing tour was a must. Like many college students, we arrived at our hostel unprepared. For example, we were unaware of the BYOT (bring your own towel) policy and ended up using clothes to dry ourselves after we showered.

Anyway, we found a flyer/pamphlet in the hostel lobby (outfitted as most hostels are with these sorts of things) for a Wild Wicklow tour. It looked promising, so we showed up the next morning good to go.

Mind you, it was mid-February and probably 1⁰C. Overcast. Kind of damp, and just overall dreary. The tour took us through the center of Dublin, by the James Joyce Tower, and to Avoca Handweavers where we bought some authentic soda bread. Then off to the Sally Gap (aka the location of Braveheart) to marvel at all the lakes and mountains.

We ate lunch at a traditional Irish pub where I was impelled to order tea (even though I rarely drank it at the time) before stopping at Glendalough. Glendalough is a 6th Century monastery, which means it’s a super peaceful place, not to mention utterly beautiful. It was still freezing though, and very cloudy, so it was hard not to keep eyeing the warm bus while checking out the scenery.

After climbing back into the bus, the tour led us through the countryside. Our guide, a dead ringer for Jack Nicholson, finally stopped talking and put on Enya. This is when the caffeine from my afternoon beverage hit me. I may not have blinked for thirty minutes as I sat staring out the windows at sheep and hills and flowers.

To add to the splendor, the sun peaked through the clouds for the first time that day. Not booming, glaring sunshine, but bright rays of sun, casting shadows and creating depth everywhere it touched. I could almost feel the warmth through the glass.

I darted my eyes around the bus. Heads were slumped, including those of my friends. Everyone else was missing this incredible affair. I looked back outside. Enya and I had a moment since there was no one else to share it with.

I began to cry.

The world was too beautiful not to. At the risk of sounding totally cheesy, it felt like my soul was being hugged. Isn’t that a nice image? I was alive, my heart was racing (from caffeine, yes, but still), and I was in love. In love with everything. Life wasn’t just happening in front of me; I was involved and connected in a way I never allowed myself to be before.

The fact I was the only one awake witnessing this (minus the driver, obvi), made it singular. I was experiencing something unprecedented and remarkable, but transient.

By the time we arrived at our next destination, the clouds had taken over, turning everything flat again. The landscape was still breathtaking, but gone were the aspects of magic and transcendence. People shifted in their seats as the bus stopped, everyone but me none the wiser.

Here, we were all given a complimentary shot of Jameson before heading back to Dublin. The whiskey counteracted my tea and I shared in the wooziness for the last stretch of the trip. Needless to say though, I will never forget those wonderful moments, or that very sincere yet undefinable feeling of awe. 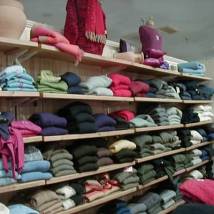 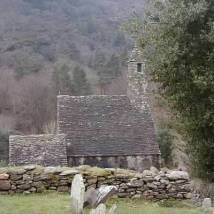 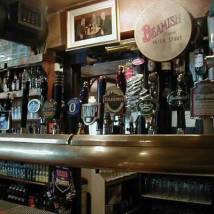 Happy Saint Patrick’s Day, Everybody! I will leave you with some words from Enya.

Who can say when the roads meet